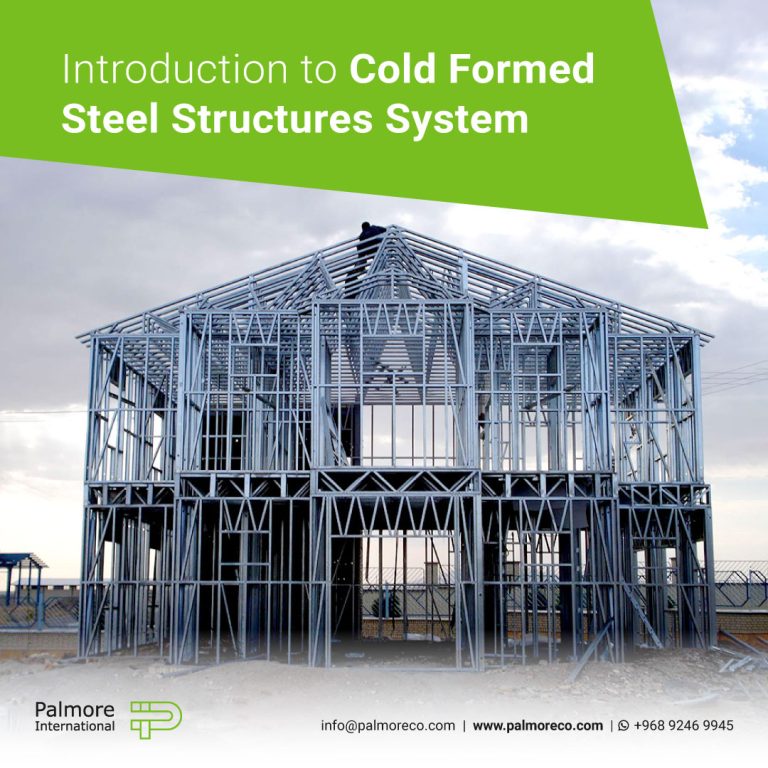 Consumable steels in construction systems are produced in two ways and are named based on the type of production method:

Cold Formed steel structure system was widely used and expanded around 1946 after the publication of the first American Steel Association (AISI) criteria derived from academic research conducted at Cornell University.

The first building system is mainly used for buildings of medium and high levels. And the second system is used for short and medium buildings. Since cold formed steel is produced in the thickness range of 0.3 to 6 mm. Therefore, the application of this steel in buildings is divided into two types: steel with a smaller thickness (usually 1mm-3mm) is used in the construction of systems consisting of cold-rolled continuous steel frames called LSF (Light Gauge Steel Framing). Also known as Light Weight Steel Structure. Also, steel with a thickness range between 3mm to 6mm is used in the construction of cold steel structures (Cold Formed Steel Structure / Cold Formed Steel Framing).

In this section, we are going to describe LSF structures:

Now we are going to explain the operation of these two types of systems with a simple example:

If we consider a two-story building consisting of cube-shaped rooms, if we use a hot-rolled steel skeletal system to build this building, we will have to use four relatively strong columns in the four corners of the rooms of this building, which are supported by vertical beams. They are connected to each other, which together form a two-tiered and interconnected steel frame.

In this system, the weight of the floors is transferred to the beams around the roof and the beams bend the force to the surrounding four pillars so that the load transfer path to the foundation and then the ground is completed. The walls in this type of system do not have a load-bearing role at all and will add to the load of the structure and are used only as a partition. It should be noted that the weight of the walls is transferred to the columns by the beam or the lower roof, and if there is no beam under the walls, only the load is transferred to the surrounding beams and finally to the columns through the function of the roof beams.

Now, if we want to use the Cold Formed Steel Structure system to build this simple building, we have to completely change our philosophy of thinking. In this type of system, the first question we have to answer. The location of the walls. In the above example, we will have a wall on all four sides. So instead of using only four columns, which allows us to transfer all the weight of the roof and walls to the ground through the main beams. Inside the walls, modularly, every 60 cm to 60 cm, we install a column. Four columns, in this system, the force is transmitted to, for example, 0 to 4 columns. As a result, the load-bearing capacity of each column is drastically reduced, in other words, each wall consists of a metal frame with a large number of columns, which is created by other orthogonal frames in the walls perpendicular to it, creating a complete three-dimensional system.

The steel consumption coefficient in this system, despite the large number of columns and structural elements, is much lower than hot-rolled steel structures, which leads to the economics of the project. In this type of system, the amount of steel consumed is between 27 and 35 kg per square meter. While in the hot rolling steel skeletal system, this amount is between 75-120 kg per square meter.

One of the important advantages of cold formed steel structures is a very high degree of uncertainty, which leads to a very good stability of this complex. While in hot rolling steel, the destruction of one of the columns can even lead to the destruction of the entire system. While in this system, due to the high number of columns, if some of them are destroyed, there is a possibility of load transfer by other columns.

The design and operation mechanism of this type of system is similar to timber structures (Timber Structure) and in countries such as the United States, which due to the large number of renewable forests, there is a lot of suitable wood for the structure of this type of structures due to economic efficiency as a system. Common construction of short and medium buildings is used. The use of Cold Formed Steel Structure is the best choice for low and medium rise buildings.This manufacturing technology replaces traditional manufacturing methods with common mistakes.

The method of execution of Cold Formed steel structures (LSF & CFSS) is based on drywall systems, which is the result of the idea of ​​achieving a technology based on a modular system, fast execution and fully industrialized. These structures are made of a frame Consisting of horizontal runner and vertical stud structural elements. As mentioned, the function of this system is the same as the load-bearing wall system, so these assembled frames are placed at the location of the walls according to the calculations made. Finally, Gypsum Board is used to cover their surface. He also used sound and heat insulation to provide the physics of the building.