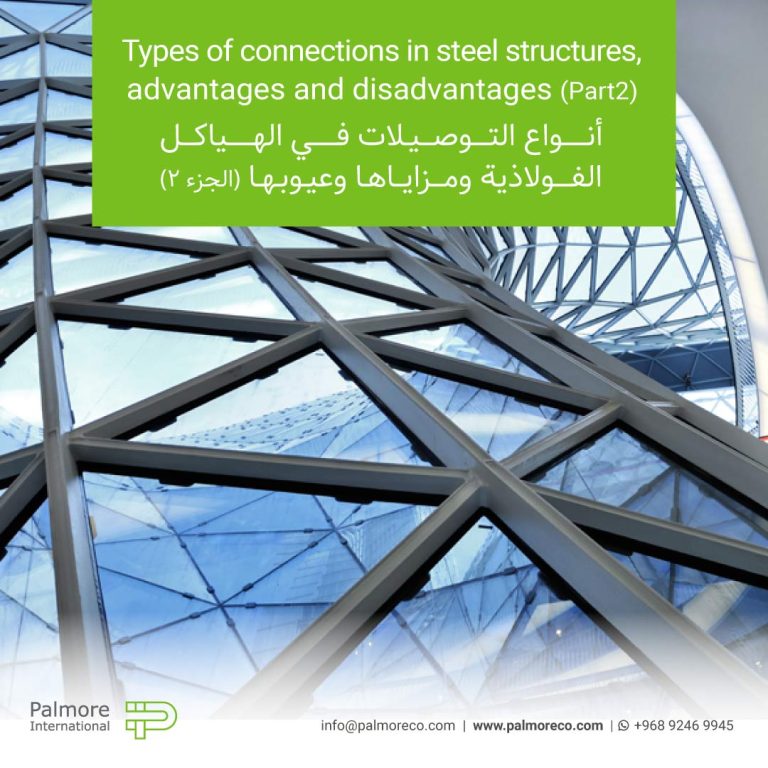 Types of connections in steel structures, advantages and disadvantages (Part2)

This connection has the advantage of flexibility in assembling structural parts and also the possibility of modifying it if necessary. This type of joint is applicable to members under stress or shear or both tensile and shear forces.

A screw is a metal pin with a cap at one end and a stem attached to it to secure the nut. Screwing is a process that uses structural bolts to connect structural members together. The screwing process is very simple compared to riveting and its implementation does not require professional labor.

Sturdy bolts of steel structures that also have a high degree of tensile strength are mainly connected and installed in two ways:

Friction connection in which large and special wrenches such as graduated wrenches or barbed wrenches are usually used to connect construction bolts and nuts.

Due to the installation and tightening of the joints using a wrench, it is not possible for the plates to slip and move, and of course, it should be noted that the joint must be cleaned before connecting with bolts in this type of connection.

A torque wrench is also used to measure the amount of force required to create a standard resistor.

Bolt fittings have many advantages over rivet or welded joints, including the following.

Ability to use semi-skilled labor and simple tools to get the job done.

Perform manufacturing processes without noise pollution and at high speed.

No special equipment or processes are required to perform.

Load as soon as the screws tighten.

The bolt connection does not allow any slippage between the joined elements, especially in close-knit holes that create stiff joints.

Friction joints transfer the load by friction and the screws are not cut.

Due to the smaller number of bolts and nuts, the size of the plates is reduced.

Because bolted joints wear out under frictional loads, larger-than-usual holes can be drilled to facilitate higher expansion and tolerance; So the holes may be standard, large or short. However, the type of hole affects the strength of the connection.

The possibility of failure in the net part under workloads is eliminated.

As fatigue loads are worn on the load-bearing member, the vertebrae will be prevented from loosening and the joint fatigue resistance will be greater and better than that of welded and riveted joints. In addition, there is no increase in stress in the holes due to the fact that the load is transferred by friction.

Unlike rivet joints, little labor is required to make the joints.

Like rivet joints, there is no need for heating and there is no risk of throwing the screw; Therefore, workers’ safety increases.

If changes are needed (for example, replacing a defective screw), the work is easily done, while this is very difficult in riveting and welding joints.

Disadvantages of welded joints include the following:

Loose joints when vibrating or impact loads are applied

Possibility of connection failure due to corrosion of bolts or nuts

When two members are welded together, a weld is formed. Welding allows the designer to use more efficient materials.

Designers in the past considered this type of joint to be less resistant to fatigue, and it was believed that it would be impossible to achieve quality welds on site.

Today, with advances in welding test methods such as non-destructive testing (NDT), welding testing and quality control has become easier. This gives designers enough courage to explore the possibilities and capabilities of welded joints.

Types of welded joints are classified according to the position of the parts to be joined to each other and their types are as follows.

Butt joint, which is often used to connect the ends of flat sheets of relatively equal thickness. In this method, before welding, the edges of the parts are prepared and chamfered if necessary, then they are carefully placed in one direction, and full penetration groove welding is used.

Overlapping is also one of the most common types of welded joints, the advantages of which can be easily matched; This means that making such joints does not require much care compared to other welded joints. The parts can be moved together to cover small manufacturing errors. In addition, the edges of the parts to be joined do not require special preparation and are often cut with a normal cut.

Shield connection is also used in the process of making composite profiles, beams, flexures, and generally parts that are matched at an angle.

The connection of the corner of the goniometer is used in the construction of rectangular box sections that are made in the form of beams or columns.

A forehead connection that does not act as a carrier and is mostly used to hold two or more plates in a row.

It is used to connect parts that are on the same surface and along each other. Therefore, the groove welding resistance must be equal to the resistance of the connecting parts.

For this purpose, the weld seam is designed so that the weld penetrates to the entire depth of the piece. Such a weld is called a full penetration weld. If the weld does not penetrate all the thickness of the connecting parts, it is called groove welding with incomplete penetration.

Comb and finger welds are sometimes used alone or sometimes in combination with other types of welds, such as corner welds, to strengthen the shear strength in joining plates together.

Welded joints are strong enough to withstand 100% of the compressive force, but riveted joints usually transmit up to 75% of this force.

The use of welded joints in metal structures that are subjected to torsional force is a suitable solution.

Welding is a method that provides a stronger connection to steel structures. This is an important case in the case of steel structures. While methods such as riveting may not be a good strategy for putting metal parts together for structures with high live loads.

Structures made of welded joints have a better visual appearance, which makes the integration of the structure skeleton.

Welded joints do not allow any expansion to the load-bearing elements. Contraction movements in the joints can weaken them and cause cracks after a while.

Occasionally, boiling and the resulting heat evaporate the water in the steel, causing internal and external distortion.

Excessive heat may cause fatigue at the joints of steel parts. It is therefore essential to use a specialist welder to ensure that the joint is not exposed to too much heat.

Inspection of welded steel requires high time and accuracy and many items need to be checked for connection stability.