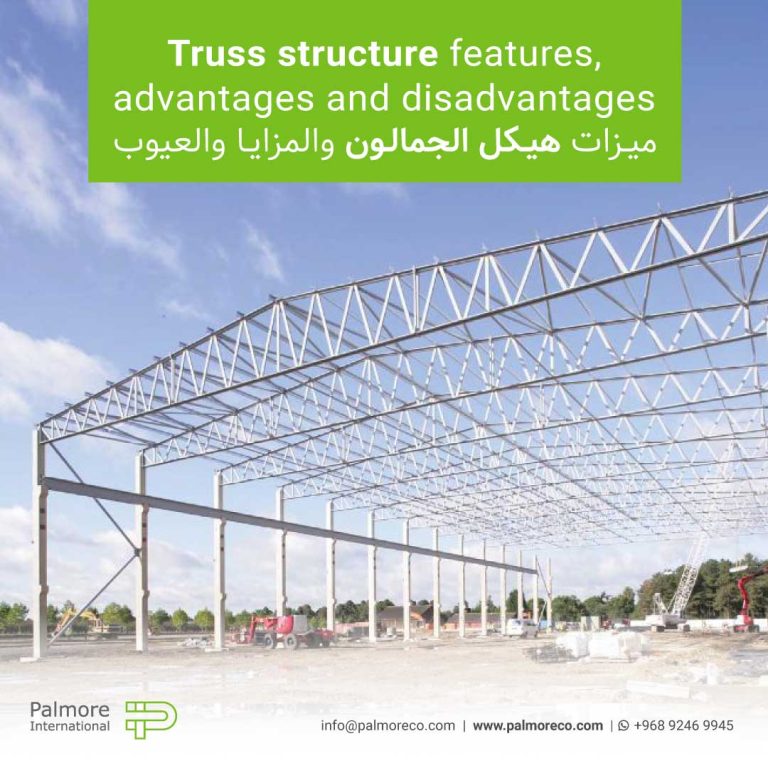 Truss structure is a common type of metal structure in construction and is called a structure in which the forces applied to the structure are transmitted to the ground by triangular steel beams with articulated connection to the supports.

Finally, beams, supports, and other truss components form a lattice structure that typically consists of 5 or more triangular units. These units have straight and smooth components, the ends of which are connected to each other in joints (Node).

In this metal structure, external forces and reactions to these forces are applied only in the area of ​​the joints and lead to the creation of forces in the tensile or compressive components. In general, the components are put together so that the overall composition acts as a single shape in practice.

Two-dimensional truss: In this truss, all the members can be placed on one page. This means that geometrically, there is no next difference in the way the truss members are positioned and oriented. The ability to withstand stresses and plate loads is one of the advantages of this type of truss.

The placement of structural members along all three axes is a characteristic feature of this type of truss. The ability to withstand loads and three-dimensional stresses is one of the advantages of this type of truss, which of course increases the construction cost and dimensions of the structure.

These trusses are designed to reduce weaknesses and increase the strengths of the previous two trusses. The strength of bearing plate loads and proper flexural and buckling strength in various directions, while maintaining proportionate dimensions are among the strengths of this group of trusses.

Pratt Truss is also more suitable for building bridges and arch-like structures in which the maximum pressure is applied in the vertical direction.

Warren truss is another type of truss that is very common in building bridges. One of the major advantages of this truss is the ability of the structure to distribute the loads that are applied to its various members. Therefore, when the load is applied to the structure from all directions, using this type of truss will be a good idea option.

One of the most important disadvantages of Truss structure is that it requires a lot of space because the interconnected triangular components must be large to withstand and distribute heavy loads.

In addition, their high maintenance costs are also important disadvantages. Of course, these are not the only disadvantages of this structural system, but since truss bridges are very large, their weight will be inevitable.

As mentioned, a truss is a set of straight rods that are articulated together to form triangular grids. The truss members are connected to each other by welding, riveting or screwing. Truss structures are widely used to build roofs, especially roofs with large openings and stairs.

Trusses have high strength and are light in weight. The connection of the members of a truss is sometimes done directly and sometimes by a sheet called the connecting sheet.

Therefore, in practice, not only are there articulated joints at the ends of the members, but their connection to each other and to the connecting plate is also considerably entangled. Paying attention to special points makes the assumption of joint connection and net axial force in truss members more real

One of the most important considerations in this case is that the truss design tries to pass the axis of the bars through a common point. The application of external forces to the nodes is another condition of this assumption.

The amount of steel used for the truss is less than the H-beam, and it weighs less and is more durable. It is also widely used in high-rise buildings, structures with large openings and stairs.

As mentioned, the use of steel structures is very widespread and the reason is the superiority and high consumption of these structures. Among the advantages of this structure, the following can be mentioned.

Ability to control the quality of steel in the factory during production, compared to concrete and building materials

Can be used at high altitudes

As mentioned in the section on framed steel structures, steel is sensitive to air humidity and high temperatures, and this leads to corrosion of the steel frame; Therefore, to prevent this, methods such as painting with anti-corrosion paints, fire-retardant coatings, fire-retardant paints and other protective methods should be used.

Disadvantages of these structures include the possibility of poor connections with poor welding quality and low fire resistance.